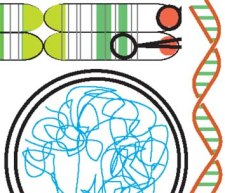 The plant nuclear genome consists of DNA divided among the chromosomes within the cell nucleus. Plant genomes contain coding and regulatory sequences for genes and repetitive DNA. They are evolutionarily dynamic and analysis provides insights into the evolution of genes and genomes, supporting studies of species phylogeny and plant breeding. The amount of DNA present in plant genomes, nearly constant within one species, varies over some 2300 times between species; the majority of the difference is accounted for genome duplication, or by various classes of repetitive DNA which may be dispersed widely along chromosomes or located in arrays at a small number of loci. Bioinformatics and genome sequence analysis show conservation of many gene sequences across all plants. Repetitive DNA motifs may be conserved over large taxonomic groupings or evolve rapidly. Repetitive DNA plays an important role as a structural component of plant chromosomes (e.g. telomeres and centromeres) and affects gene regulation.