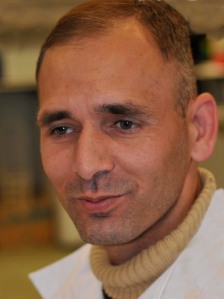 Dr Faisal Nouroz completed his PhD at the University of Leicester in 2012, working on mobile element evolution in two contrasting crop groups, Musa and Brassica.

Dr. Faisal Nouroz held a Ph.D scholarship from the Higher Education Commission and Hazara University Mansehra, Pakistan and joined the Molecular Cytogenetics Lab, Department of Biology, University of Leicester in March 2008. He started working on Transposable Elements (TEs) with special emphasis on the structures and abundance of TEs contributing to the genome diversity in the diploid and polyploid Brassica and Musa crops. The genus Brassica (family Brassicaceae) includes many important crops such as oilseed rape (canola), brown mustard, Chinese cabbage, turnip, cabbage, cauliflower, broccoli, brussels sprouts, collards, kale and kohlrabi, and are a valuable and long-standing food source in both developing and industrialized countries. Brassica oil production is rapidly increasing worldwide and accounts for 12% of global vegetable oils (after only soybean and cotton). Musa commonly called as banana and plantains are the fourth most important tropical crop of the world. They are herbaceous monocot plants from family Musaceae. There are more than 1200 banana cultivars with a high genomic diversity and variability; most of the cultivated species are triploids, with occasional diploids and tetraploids.

Transposable elements (TEs), also termed as mobile genetic elements, jumping genes, or transposons, are a major component of all eukaryotic genomes, representing 40% of the entire genome in humans and 50-90% in important agricultural crops like maize, wheat, barley, rye and sugar beet. The first TE to be described (Ac element of maize) was discovered by Barbara McClintock in the early 1950s. With the advancement in genome sequencing data, the identification and annotation of TEs is most important as major component of eukaryotic genomes. By the exploitation of bioinformatics, molecular and cytogenetic techniques; autonomous and non-autonomous mobile TEs belonging to different superfamilies were identified and characterized. The novel comparative genomic approach was used named “Dot plot characterization of TEs” (DPCTE), which is highly effective method for the identification of various types of TEs as well as small insertions/deletions within the genomic sequences.

Class I TEs (retrotransposons) like Gypsy, Copia (LTR), SINES and LINES (Non-LTR) predominated in Brassica genomes. Class II DNA transposons were CACTA, hAT, Harbinger, Mariner, Mutator, MITES, Stowaway, Tourist, and Helitron-like elements. Among miniature inverted-repeat transposable elements (MITEs), Stowaway, Tourist, and Mutator-like MITEs were abundant with several novel families identified. In diploid and allopolyploid Brassica species, A- or C-genome specific elements were found while others were more active. PCR enabled accession identification and phylogenetic reconstruction in Brassica and Musa. The identified TEs were BLASTed against various genomic databases like NCBI, EBI, Gypsy Database, Repbase, Censor (GIRI) Database, Transposons Database to see their novelty. The conserved protein domains of the TEs were identified by using Conserved Domain Database (CDD) software. The evolutionary events of long terminal repeats (LTRs) in retrotransposons and terminal inverted repeats (TIRs) in DNA transposons were investigated by using WebLogo. The TEs or their domain sequences were aligned in CLUSTALW multiple alignments and were used as markers to retrace phylogenetic relations among various Brassica and Musa genomes, which also provide the diversity, evolution and genomic organization of these TEs. Fluorescent in situ hybridization was found useful in chromosomal localization and distribution of various TEs.

During his Post Doctoral fellowship at the University of Leicester, UK, Dr Faisal Nouroz further investigated the other non-TE-related classes of difference, extending his work to additional sources of difference between the genomes and addressing fundamental questions in the two species groups such as: What are the proportions that are TSD/TIR related – in numbers and length terms separately? What differences are there in retroelements? What other, unidentified sequences are there? What are the sequences within and between the TSDs/TIRs? How much is evolutionary proportion among various TE sequences?

In 2013, Dr. Faisal Nouroz returned to work in Pakistan and is currently in the Department of Botany, Hazara University, Mansehra. Associated with his research students at Hazara University and collaboration at University of Leicester, he is working to explore various TE superfamilies in various crops with the help of bioinformatics, molecular and cytogenetic techniques. We also hope he will be able to return for periods to Leicester, and we look forward to future meetings and discussions.