Banana research at the botanic garden 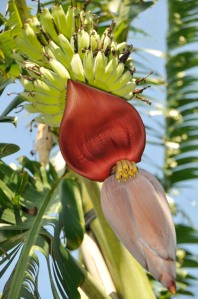 Dessert bananas and the cooking bananas or plantains are among the oldest crops in the world. Most crops were domesticated through a long pathway of selection and crossing but, for banana, virtually all the two thousand varieties which are grown throughout the tropics were collected as spontaneous mutants in the wild with the extraordinary property of having large fleshy fruit without any seeds. Most varieties of banana are also unusual in having three sets of chromosomes, a condition known as triploid.

The wild progenitors of the domesticated banana are from south-east Asia and are currently known as Musa acuminata (with a genome designated as ‘A’, green on the map below) and Musa balbisiana (with a ‘B’ genome, orange on the map below). About 15% of the world’s banana production is for the export trade, and is based on a single variety, ‘Cavendish’. This sweet banana has the genome constitution AAA. Banana varieties that are hybrids with AAB and ABB genome constitutions are a staple food for a billion people in Asia and Africa, and in Leicester we are fortunate that many of these plantains and cooking bananas (eaten fried or steamed and mashed as a vegetable) are easily available in the market and speciality shops.

In many parts of Asia, banana leaves are also used as disposable plates or as wrappers for steaming rice or banana fruit. Interestingly, there is now the possibility that these two currently recognized A and B species will be merged into one; this would probably mean resurrecting one of the original names given by Linneaus, Musa paradisiaca L. or Musa sapientum L.

Traditionally, bananas are propagated by side suckers to the main stem but, in commercial plantations, most plants are now multiplied through tissue culture to ensure disease-free planting material. In our research group, we study the diversity and evolution of bananas at the DNA level, and are looking for new diversity to improve current varieties. The amount of DNA in plant genomes varies widely, from less than 100 Mbp in some carnivorous plants such as Genlisea, to more than 17,000 Mbp in wheat and pines. Bananas are at the lower end of the range, with about 550 Mbp. We were involved in the international consortium that sequenced all the DNA in banana in 2012, and thus we have a reference for all the genes and regulatory sequences present in the species.

This is vital if breeding programmes are to produce new disease-resistant varieties. Disease is a major problem in banana production in the topics: bananas suffer from fungi, bacteria, viruses, insects and nematodes. About a third of the cost of growing the bananas is spent on crop protection chemicals, and all fruit bunches are covered with blue bags to deter insects from damaging the fruit and allowing entry of secondary fungal. Eradication of disease in some areas costs millions of pounds and requires destruction of millions of plants. Very careful agronomy can control diseases, such as burning plants at the first sign of infection, or dipping machetes in bleach between harvesting each plant, but such measures required huge amounts of training and labour. Some diseases cannot be controlled with agronomy or chemicals, and means banana production is lost to an area. Our current work is looking at the diversity present in the whole banana genome at various positions related to diseases, we are also looking how the variation can be exploited in generating new varieties of banana which are disease resistant.